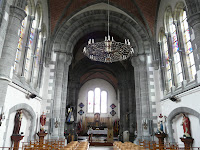 In the summer of 2011 we were driving in Southern Belgium in the area known as Flanders where many battles had taken place in World War I. We were driving with no particular destination. We followed signs as we saw them to battlefields and allied gravesites. Sometimes we would see a large church steeple on the horizon and we would drive over and check it out. As we were driving north we noticed a lovely church sitting on a small hill and we decided to take a look. We drove off the motorway onto a small country road that lead us to the village of Mesen or Messines. The church was even larger than it looked from the motorway. We parked the car and got out to take a look. The outer door was not locked so we went into the small foyer but no matter how hard we pulled and pushed we could not get the inner door to open. We walked back outside and walked around the grounds and took several photos of the church. Off to one side was an information sign that told us this was the Church of Saint Nicholas and there was a crypt that contained the grave of Adele, Countess of Flanders. I was surprised, to say the least. I had read about Adele because she was an ancestor of mine. I knew she was buried in Belgium but I could not locate exactly where. I had learned that her husband, Baldwin V, Count of Flanders was buried in a crypt in Lille, France. We had gone on a quest to find his grave and learned at the Office of Tourism in Lille that he was buried in a crypt that was located under the Palace of Justice in Lille. It seems there had been a church on the site but it had been destroyed in WW I and never rebuilt and the Palace of Justice was later built on the site. The crypt was accessible but was not open to the public. We had been disappointed but we carried on. Now we had stumbled on the site of his wife’s grave but couldn’t get into the church to see it. About that time a jogger came by and went up the steps to the church, went into the foyer and did not come out. I told Sylvia what I had seen so we went in again and this time when we pulled on the door into the Church it came open. The jogger left as we went in and we were left alone in the Church. Sylvia began taking photos and I wandered about. Sylvia was in a side chapel on the left and I went into one on the right. As I was looking at the wall hangings and the Alter I saw a door with the word crypt lettered at the top of the door way. The door was open and I could see a stairway going down into the basement of the church. Wow! Was I excited! 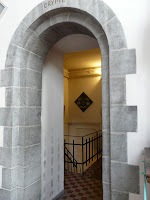 I called out to Sylvia and she joined me and we discussed whether we should go down or not. The lights had come on as I walked up to the door so we decided to go see what was there. I was surprised that Sylvia was going down into the crypt and that she was leading the way. For several years she has suffered from claustrophobia and has avoided small enclosed spaces. 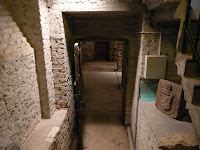 But here we went - down several flights of stairs. The deeper we went the more odoriferous it became. It was a damp, rotten smell. We reached the bottom and went into the crypt itself and there in the center of the floor was Adele’s grave. There were statues located around the space and some pieces of stonework that were probably from the original church that had stood on the spot and then been destroyed during WW I. 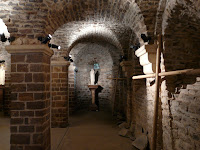 I could hardly take it in. I was standing on a site that dated back to the eleventh century. Adele had died and been buried here in 1079. We talked in amazement at how serendipity had brought us here to this place. After some time had passed and Sylvia had taken a bunch of photos we turned to retrace our steps up the stairway. 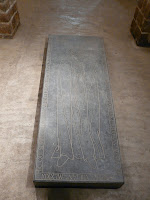 Just as we turned to go into the hallway that lead to the base of the steps, the lights went out! It is surprising the number of thoughts that can go through your mind in a short space of time. I immediately thought “we are all alone in this church, no one knows we are here; I can find the steps and we can make our way up to the top but what if the door is locked; oh, yes, the lights are on motion detectors and we have been here so long they just went off because we had stood still for so long” and sure enough when I moved towards the steps, the lights came back on. What a relief. And what an awesome experience.
Here is some information I have found about Adele and the Saint Nicholas Church:
Adela Capet, Adèle of France, Adela of Flanders, Adela the Holy or Adela of Messines is one of my 28th great grandmothers. She was born in 1009 in Nevers, Nivre Department, Burgundy Region, France and died 8 Jan 1079 in Messines Benedictine Monastery, Messines (Mesen), West Flanders, Belgium. She was the second daughter of Robert, the Pious and Constance of Arles the King and Queen of France. As dowry to her future husband, she received from her father the title of Countess of Corbie. She was betrothed to her future husband at a very young age, in fact, she was carried to the betrothal ceremony in her baby bed. In 1028 at the age of 19 she was married to Baldwin V of Flanders (1012 † 1067) in Amiens. Their children were:
Baldwin VI of Flanders , (1030 † 1070)
Matilda of Flanders (1032 † 1083). In 1053 she married William Duke of Normandy , the future king of England
Robert I of Flanders , (1033-1093)
Henry of Flanders (c. 1035)
Sir Richard of Flanders (c. 1050-1105)
Adèle's political influence lay mainly in her family connections. On the death of her brother, Henry I of France, the guardianship of his seven-year-old son Philip I fell jointly on his widow, Ann of Kiev , and on his brother-in-law, Adela's husband, so that from 1060 to 1067, they were Regents of France. 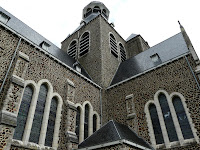 Adèle had an especially great interest in Baldwin V’s church-reform politics and was behind her husband’s founding of several collegiate churches. Directly or indirectly, she was responsible for establishing the Colleges of Aire (1049), Lille (1050) and Harelbeke (1064) as well as the abbeys of Messines (1057) and Ename (1063). In 1057, Countess Adèle founded a Benedictine abbey for noble ladies. The abbey was transformed into a royal Institute by Empress Maria-Theresa (1745-1780) in 1776. After Baldwin’s death in 1067, she went to Rome, took the nun’s veil from the hands of Pope Alexander II and retreated to the Benedictine convent of Messines. There she died, being buried at the same monastery. Her commemoration day is 8 September.
Like the village of Mesen, the abbey was completely destroyed during the First World War. The crypt, located under the choir of the St. Nicholas abbey-church, was used as headquarters by the German staff, and has been preserved, as well as Adèle's grave. The church was rebuilt in 1928 exactly as it was before the war. It is lit by a big brass chandelier and wall lights made and donated to the church by Otto Meyer, a German veteran of the battle of Mesen. 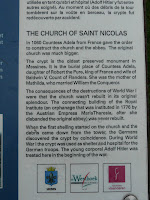 Saint Nicholas Church (Mesen)
Originally the Benedictine abbey church of Our Lady leaning property and other abbey buildings.
After the abolition of the abbey in 1176 elevated to parish.
The church, with its domed tower, can be seen from miles away. The building was restored to its pre-war state in 1928. This church originally served as an abbey church for the convent of Saint Benedict and was erected by countess Adela of France. The church is adorned with a magnificent chandelier (1,94 metres wide) in yellow copper and many wall lights, designed for and given to the church by Otto Meyer, a German veteran who survived the battle of Messines.
The Crypt
This 11th century roman crypt is the only monument in Messines that is officially classified and protected. Countess Adela was buried here on 8th January 1079. She was the daughter of the French King Robert the Pious, wife of Baldwin V (Count of Flanders), mother of the English Queen Mathilda and thus "ancestress" of the British Royal Family. The crypt, where the Germans installed their headquarters, was restored in 1931 in its original state after the devastations of World War I.
The Peace Carillon
The carillon in the church tower has 59 bells. The first bell of peace (weighs more than 280 pounds) was inaugurated on 17th May 1985 in Ypres by Pope John Paul II. The carillon can be heard every 15 minutes, ringing out hymns from the nations that took part in World War I.
Posted by Bill Blimes at 2:13 PM